skip to main | skip to sidebar

Thank you for participating!! 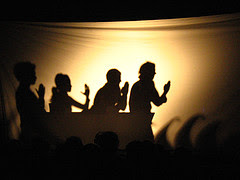 We're back in Toronto now, and we all had a great time together in New York. Thank you for coming out to see the show! We were happy to see the audience growing with each performance, and we are especially grateful to the helpful and enthusiastic staff at the Lucille Lortel Theatre.

There's nothing more exciting than getting together with a big group of friends to make art. Breaking the rules, having a ball: there's little in life that compares.

A special thank you to the wonderful people behind the scenes who made the show happen: Samara Liu, Marlena Zuber, Sarianna Mileski, Allison Peacock. A round of applause to the cast members whose interviews have yet to be posted: Kathleen Phillips, Shayna Stevenson, and John Tielli. Rose Bianchinni and Jason van Horne made a great set, mixing pieces from the past productions with specially designed items for the Lucille Lortel.

Thank you for your support!

The Daily Rat is now posting from East 14th Street. We opened the show yesterday and the tap dancing went off without a hitch. We have four more shows, all at the Lortel. The cast and crew are enjoying Manhattan and taking over bars and restaurants Canadian style: "Excuse me, excuse me... please, sorry, Oh I'm sorry. Thank you!!"

The last of the rats are getting made up in the hall of the hostel now, which means it's almost time to go to the theatre. Maybe we'll see you there! 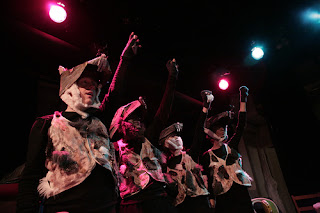 The Daily Rat is posting this special bulletin from the patio at Musa on Dundas St. West in Toronto. Stephanie Markowitz is recalling the moment that her father, Murray, first attended a reading of the Rat King, and insightfully said, "It's like Cats, but Rats!" And that's exactly what it is. Except rather than draw on T.S. Eliot's lighter work, The Rat King draws on the spirit of the Hollowmen. Murray Markowitz hit the nail right on the head, and has since been a great help to us throughout the life of the production.

At the same reading, dear Adam Gilders was in attendance. Nodding his head, rubbing his chin thoughtfully, as was his habit. Adam passed away recently, and it is to him that we dedicate this production of the show. Without his guidance and encouragement, the script would have cobwebs, rather than our actors' hands, on it. Now, the Daily Rat will now cease typing, to raise a glass in his honour.

Until tomorrow, when we nibble on the big apple, good day and good night.

End of the world got you down? 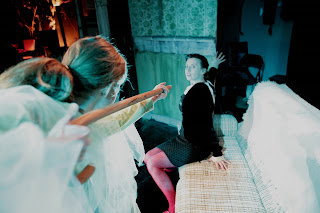 Here is a great shot that Lee Towndrow took for the first production in Toronto. Magali and Kathleen are featured here, Kathleen being the ghost, Carson Cannon.

Mike Follert, our token academic, was in NY for a conference this weekend, and found a shot from The Rat King in The Village Voice. The article is about the New York Internatinal Fringe Festival as compared to Fringes in Dublin, Edinburgh and a couple other big cities.

This will be a busy week as we stitch up rips in the Rat costumes and glue our shoes back together, but there are a few more performers to profile before The Daily Rat goes to NY on assignment, so stay tuned...

Laura Barrett is a Toronto sensation whose songs cover topics ranging from video games, to whales, love, and secret agents. If you've ever visited music critic Carl Wilson's blog zoilus, you've probably heard every glowing adjective that can be applied to a singer/songwriter used to describe Laura. She wrote a few of the numbers in the show and has been working with the team since the summer of 2006. In addition to her SOCAN award nominated songwriting, Laura lends her talents to The Hidden Cameras, The Adorables, Barzin, and the soon to debut 'TANK.'

The Daily Rat: How did you get involved with The Rat King?

Laura Barrett: Maggie and I met on campus at U of T many years ago, when she was solidifying her dystopian visions in a beautiful big book. After a few years of connecting through various musical and creative webs, she pulled me into the Rat King universe last year, when we produced it at the Harbourfront Centre. Now my dreams are filled with its songs, and my conversations peppered with its dialogue.

The Daily Rat: What is your role in the show?

Laura: I'm the Musical Director, and I play keys and sing. I try to do justice to Bob Wiseman's original material, and I've also added a few new tunes of my own to the mix. During the show, I am just another rat, albeit one with a piano in front of me.

Rat: What other creative and/or political projects have you been involved with?

Laura: I play clarinet in Henri Fabergé & the Adorables, keys in the Hidden Cameras, and vibraphone in Barzin. I've fallen off in terms of political involvement in recent years, though I will be participating in Ladyfest Toronto and Hysteria in the fall of 2007.

Rat: Of the themes in The Rat King, which do you feel a strong connection to?

Laura: To me, Ed Cannon's hatred of mutants is a stand-in for all forms of prejudice and oppression, whether based on ability, ethnicity, gender, sexuality or class. Humanity got where it is through mutation, and in placing the story at the dawn of a new, mutant world order, The Rat King playfully and intelligently deals with ideas of diversity and the struggle against tyranny.
Posted by The Rat King at 3:24 PM No comments:

The Theremin, our newest cast member

This month, the songs and dances of The Rat King Rock Opera will be embellished by the use of a Theremin. The journalists involved with The Daily Rat each attempted to interview the instrument, but with thunderous weather outside, and ample static in our shoes, we upset the machine and could not receive clear answers.

You can build your own Theremin at home with relatively inexpensive parts. Or you can see the Theremin movie (featuring master Theremin-player Clara Rockmore, as pictured), and the play "Theremin" that will also be part of the NY Fringe this summer. In The Rat King, the music of the Theremin helps give voice to the furry feelings that are difficult to put to words, despite our lavish use of rhyming couplets.

We hope that you enjoy this spooky new addition to the cast of the show!
Posted by The Rat King at 8:17 AM No comments: 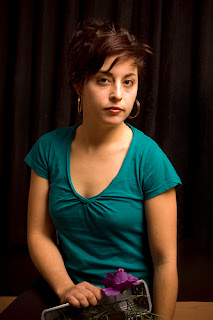 Stephanie Markowitz is the mastermind behind the production: without her, The Rat King would likely still be a collection of sketchbooks and secret manuscripts hidden under the author's cubicle. Stephanie is bright, quick and capable, and embodies an unusual combination of talents: she is an artist with strong ideas, and she is also able to get things done and plan budgets. It is rare to meet a creative individual who is both incredibly organized and amazingly imaginative: Stephanie is that unique gem. She has been involved in many exciting projects in the past year: from her work with The Film Farm, to Away from Her, and an upcoming film version of a Barbara Gowdy story, this dynamo doesn't stop for an instant. Stephanie Markowitz has declared a revolution in the world of musical theatre, and even the Rats can get behind that.

The Daily Rat: How did you get involved with The Rat King?

Stephanie Markowitz: Maggie and I met in a Wittgenstein Class at the University of Toronto. Gravitating towards each other, our conversations quickly turned away from Philosophical Jargon- and moved towards Art and Action. Maggie had workshopped the Rat King as a Mini Rock Opera a couple years prior and wanted to take it further. I was intrigued. Once I read the script and got to know Maggie's artistic, political and personal sensibilities better, I knew this project was something special. I jumped on board as Producer/Co-director with bells on.

Rat: What other creative and/or political projects have you been involved with?

Stephanie: I co-produced Michael Snow's short film, SSHTOORRTY, was assistant to the Producers on Sarah Polley's AWAY FROM HER. I coordinated an Indie Film Series at CAMERA on Queen Street W. The Rat King has currently taken over my life, but I am also Producing a short film written by Barbara Gowdy called, GREEN DOOR, and teaching yoga at the Centre for Addiction and Mental Health.

Rat: Of the themes in The Rat King, which do you feel a strong connection to?

Stephanie: I often lay awake at night thinking about the end of the world. I have also fantasized about men with three arms.
Posted by The Rat King at 6:30 AM No comments: 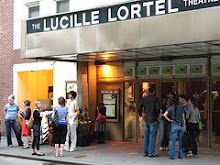 "Working hard behind the scenes" 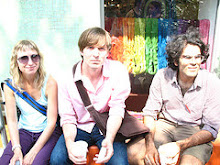 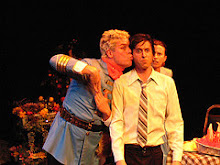 After a night at the theatre, a posh meal 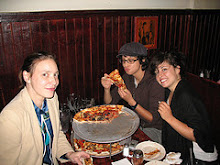 Looking for food in Weedsport NY? 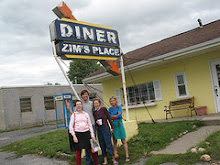 Friendly service and all day breakfast, we found this spot on the ride home

Things are Looking up for Keith Cole 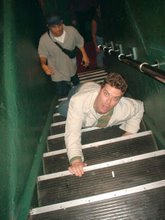 Glen Sheppard as the Rat King, by Lee Towndrow

The Rat King
Toronto, Ontario, Canada
A Rock Musical written by Maggie MacDonald and Produced by Stephanie Markowitz, with music by Bob Wiseman and Laura Barrett, Directed by Markowitz and MacDonald, and Music Directed by Laura Barrett, Lighting Design and Stage Management by Kate McKay, Art Direction by Rose Bianchini and Jason van Horne and choreography by Heidi Fox Lange